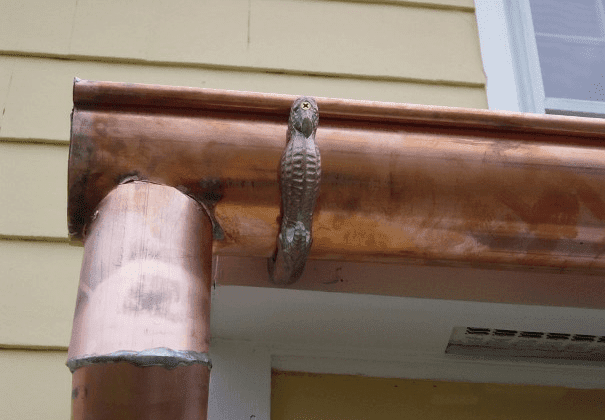 We’ve all seen fingerprints on copper before. They can be a bit of an eyesore on copper gutters and downspouts, and on copper roof panels, especially if no care is taken to avoid them. A good way to annoy (a probably high-paying) customer, and potentially create serious contention between homeowner and contractor, is to ignore the always-wear-gloves-rule. Fingerprints will become less visible as the copper ages, usually quite rapidly. Within a few weeks, usually, fingerprints will blend into the finish on the tarnishing copper and won’t be noticeable. They do make the gutters and downspouts any less functional, they won’t make your copper roof leak, and they will not shorten the lifespan of the copper in any way.

Fingerprints on shiny new copper are, however, an eyesore. I think they can leave homeowners with the impression of poor quality workmanship. I have seen some amazing copper craftsman leave fingerprints and beat copper into submission until it is dinged and dented. For them it was less about the way it looks, and more about properly sweated solder joints and tightly locked seams. And while I can appreciate that, I also understand that the love of copper on the consumer end is, almost always at least in part motivated by aesthetics. A lot of folks just love the way the shiny finish on copper looks, sans fingerprints. Copper gutters or a copper bay window roof can also be a status symbol, but it’s hard to be proud when the neighbor’s keep asking if the fingerprints will go away eventually.

So, how can you avoid fingerprints on copper as an installer?

If you are in a part of the country where copper work is less common, you’ll probably need to start by asking the guys at the supply house wear gloves. This usually applies when buying flat stock for copper roofing panels. I try to catch them before they roll it up so I don’t need to ask them to do the work twice (if you’re inclined that way). If they roll it up without gloves, I will ask them to roll up a new one with gloves on. The greasy smudges will turn into brown fingerprints within a day. Nitrile gloves, rubber gloves that your doctor wears in the exam room, mechanic gloves – almost any kind of new gloves will work. They are cheap and worth avoiding the headache of fingerprints on your gutters.  If possible, avoid wiping or itching your face and transferring the sweat and oil to the copper. This is especially relevant  in the hot summer months, and it can happen even if you are wearing gloves. Keep the gloves clean to help the copper stay clean.

How do you clean fingerprints from copper gutters?

There are numerous products available to bring the luster back to copper, and at least partially remove fingerprints. We like to use Brasso. It is available online and at some home stores and hardware stores. Brasso doesn’t have a strong chemical reaction with the copper the way some other products do. I recommend using in a test area first. Keep in mind, the longer the fingerprints are there, the more difficult it becomes to remove them. Keep in mind also, the longer they are there, the more invisible they become.

Hope this helps! Feel free to comment if you’ve used a product that works well. Maybe we will test a few products out on video down the road.